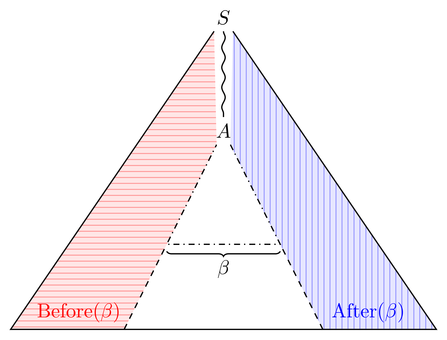 — Raffaello
fonte
I started to write an answer then realized my proof was the same as yours. I'd have put it this way (compressed to fit here): form a grammar by adding a new terminal (a metavariable) for each non-terminal and a production . Then sentential forms of are the words recognized by that consist of metavariables. This is the intersection of a CFG with a regular language and thus is regular. The prefix set of a CFG is a CFG (take a PDA and make every state final). is again a CFG.
— Gilles 'SO- stop being evil'
1

@Gilles, three comments on that: 1) the sentential forms typically (properly) contain the language. 2) "make every state final" -- that won't work; you'll accept prefixes of non-words, too. 3) The last step of "cutting off" a suffix seems to be tricky to get rigorous. :/ Do you have a rigorous but more compact proof than mine?
— Raphael
9

and are context-free languages. Here's how I would prove it. First, a lemma (which is the crux). If is CF then:

The lemma can be jiggered to handle cases where could overlap with itself (like -- keep looking for even while in the midst of scanning for a prior ) or appears multiple times (actually, the original non-determinisic forking already handles that).

It's fairly clear that , and since the CFLs are closed under finite-state transduction, is therefore CF.

A similar argument goes for , or it could be done with string reversals from , CFLs also being closed under reversal:

Actually, now that I see the reversal argument, it would be even easier to start with , since the transducer for that is simpler to describe and verify -- it outputs the empty string while looking for a . When it finds it forks non-deterministically, one fork continuing to look for further copies of , the other fork copying all subsequent characters verbatim from input to output, accepting all the while.

What remains is to make this work for sentential forms as well as CFLs. But that is pretty straightforward, since the language of sentential forms of a CFG is itself a CFL. You can show that by replacing every non-terminal throughout by say , declaring to be a terminal, and adding all productions to the grammar.

I'll have to think about your question on unambiguity.

We use cookies and other tracking technologies to improve your browsing experience on our website, to show you personalized content and targeted ads, to analyze our website traffic, and to understand where our visitors are coming from.

By continuing, you consent to our use of cookies and other tracking technologies and affirm you're at least 16 years old or have consent from a parent or guardian.